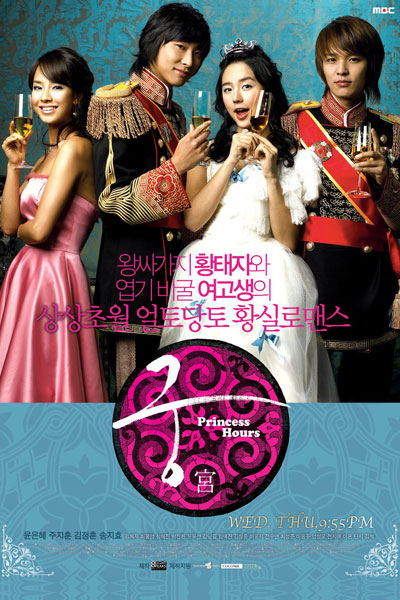 Director: Hwang In Roe [황인뢰] and Kim Do Hyeong [김도형]

Goong is a story about young love in face of tradition, politics, and intrigue. In the imaginary world, modern-day Korea is a constitutional monarchy and the Royal Family lives in a grand Palace, the Goong. Story opens with the sudden death of the reigning the King. Faced with the decreasing popularity among the public for the Royalty, a grand wedding for the Crown Prince, Lee Shin, is decided to be the best publicity move to improve the image of the Royalty and at the same time prepare Shin for immediate succession. The intended bride? The headstrong, awkward, and sweet spirited Shin Chae Kyung that just happens to go to the same exclusive art school. Chae Kyung was betrothed to become the next Crown Princess by her grandfather and Shin's grandfather. After 14 years of living in England with his mom, Lee Yul appears all of a sudden. He is Shin's cousin as well as the former Crown Prince. Everything seemed to be going normally until Chae Kyung's optimistic spirit wins the heart of internally lonely, Yul. As the Crown Prince Shin and simple-minded Chae Kyung's relationship appear to developing deeper feelings, a series of scandals are exposed to the public right after the pair were officially announced married. Will love prevail all in a world of political pressures and martial hardships? Or will being in the spotlight of the public be too much for the young newlyweds to endure?
Cast Stars
Goong (2006) trailer:
View More Video Show All Episodes
Comments
Comments
Follow us on
News Telegram